A few days ago, Mari posted this recipe for Mexican Chicken Pasta Casserole that she had found on Pinterest (original source 2 boys + 1 girl = One Crazy Mom). It looked delish. Love casseroles and pasta, plus I had some of those ingredients from the Try The World Spanish Box that I wanted to utilize.

The two ingredients that I took from the Spanish Box were the El Avion Paprika and the Oleum Hispania Extra-Virgin Olive Oil. 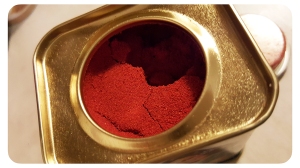 I’ve only ever had paprika that you can pick up at the grocery store, so though this was similar, I could definitely detect a quality difference. This was more refined, yet more rustic in flavor profile. It’s not a hot paprika, maybe a touch sweet, but just the barest touch. The EVOO was sooooo very different from the ones I’ve ever tried! It had such a powerful “fresh green” scent and flavor. I was trying to rack my brain as to what those scents and flavors reminded me of and it hit me, fresh off the vine ripe tomatoes – once you cut into them, their stems, etc and maybe even a hint of cilantro. I was floored at the difference between those EVOOs in the grocery store and this one. I could have also used the El Navarrico Salsa Tumaca Con Ajo, but decided to leave that for something else, not sure what yet. I’m telling you what though! If this is a preview of the type of flavor experience I’m going to get from the items in these boxes, the sub is definitely a keeper!

So onto the food…

Here’s how I did it for last night’s dinner, because I have to add my own spin 😉 [original recipe link again]

I added a few things and had to substitute in a few things. This is photo heavy, so prepare to scroll.

While my son, my sous chef, lol, prepped the fresh veg, I pan fried up some chicken thighs using the EVOO. It was cooked until almost done, slightly pink, then thinly sliced instead of shredded.

Sprayed my casserole dish down with Pam, then added Salsa. I used Frontera All Natural Gourmet Mexican Salsa (Mild) in Roasted Tomato (picked this up at Fresh Market) and added the black beans next. 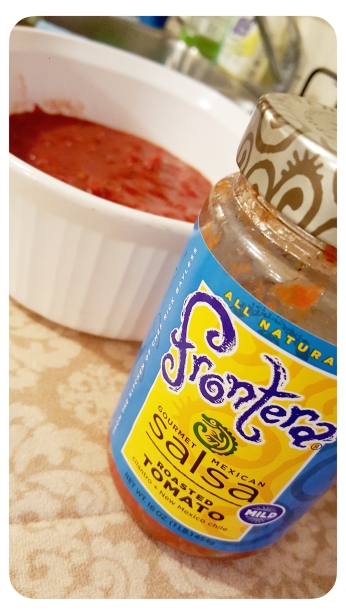 Then instead of using canned corn, we took fresh corn and cut the kernels off of the cobb. Do you know how long it’s been since I’ve had corn? Seems like forever, and unfortunately, this was not non-GMO

Next it was white onions sliced thinly and a seeded and minced jalapeno (these are not in the original recipe). On top of that was my seasonings – since I didn’t have taco seasoning, I just used what I thought made sense flavor-wise. Paprika, cumin, onion powder, garlic powder, salt, pepper, chili powder, cayenne pepper, celery salt, and caraway seeds.

Added the chicken, then I mixed all of that together within the casserole dish. 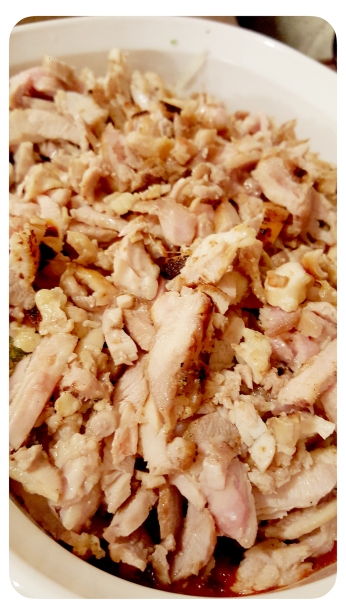 Added my pasta… I forgot to get pasta, so I used what I had on hand which was some No Eggyolk noodles and rotini, lol… Then added the chopped fresh cilantro. Did you know that the stems are just as flavorful, if not more so, than the leaves? We use all of it. 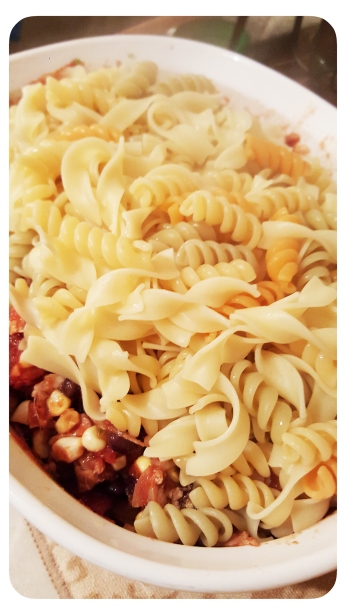 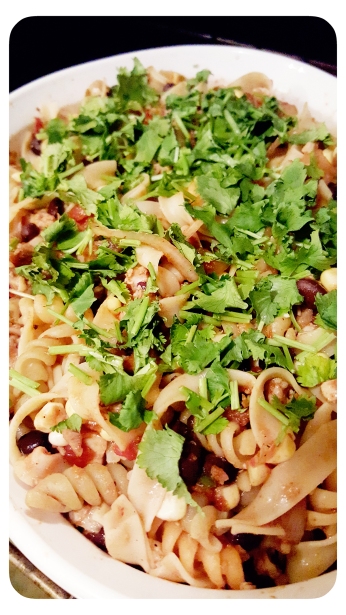 Meanwhile, we got our garnishes/toppings ready, which were tomatoes, cilantro, and lime. I thought about doing avocado, since it’s recommended in the original recipe. This was a whole lot of food already, so decided to leave it out. 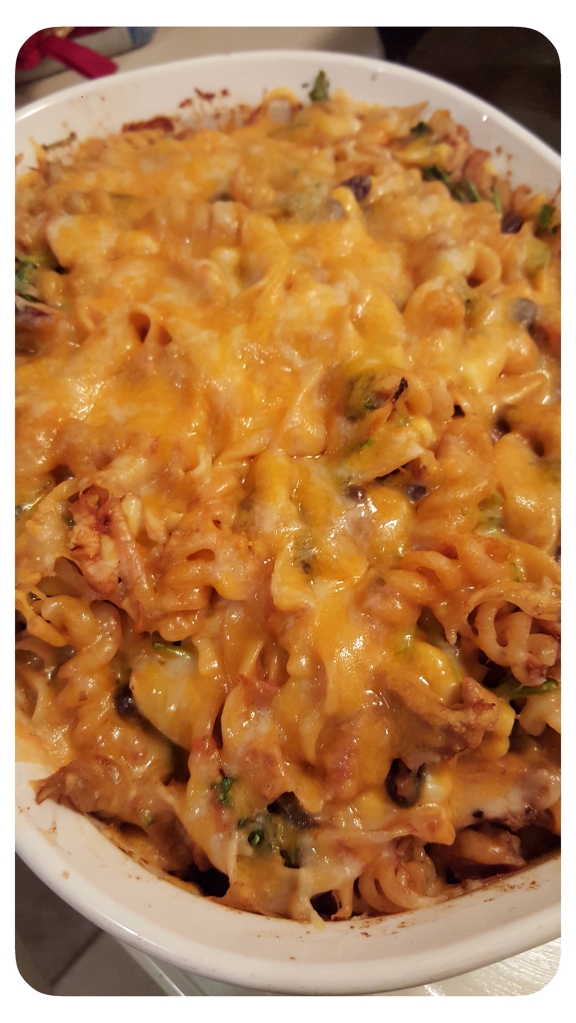 It was really good!!! Ended up with waaaay too much for three people and had to have it again tonight for dinner.

Thank you Mari for posting the recipe and thank you One Crazy Mom for the recipe!