Today was a great day at school. It was Orange Fever day, part of Spirit Week, though I wore the ONLY orange thing I have, lol, but that’s not why the day was great. It was also Food day, which is always good! And it was Awards day. I received my awards/certificates for last quarter (3rd) and am extremely happy to say that I got all three that I was aiming for – Perfect Attendance, Honor Roll, and Letter of Excellence.

It’s weird to say (it shouldn’t be though), but I am actually really proud of myself and my accomplishments. When I decided to go back to school to start a whole new career, the decision was a split minute one. I probably mentioned it before, but I initially started in the Pharmacy Tech Program and switched to the Medical Assistant Program in the 2nd quarter. What’s even more mind-blowing is that I went into this with a great, I mean GREAT, aversion to needles and blood. The sight of blood used to make me turn green and start seeing stars, and needles I just wanted to run far far away from. I’ve gotten over all of that, well mostly, I haven’t encountered a patient bleeding profusely, so don’t know how I’ll react – I’d like to think that I’d handle it without passing out. 😉 I’ve come so far and gotten out of my comfort zone so many times, it’s just an unreal feeling. Though, I’m trying not to sike myself out since my final quarter is approaching quickly and that anxious feeling for externships and certifications is gurgling in my chest and throat. I know I’ll get through those, just have to concentrate on all the positives. Anyway, Just wanted to share 🙂

So slouchy… Totally off subject, but eh, I’m feeling random.. I have a slouchy beanie! Though I’m not too sure this particular one is really me. Of course, it doesn’t go with my orange shirt at all, LOL. 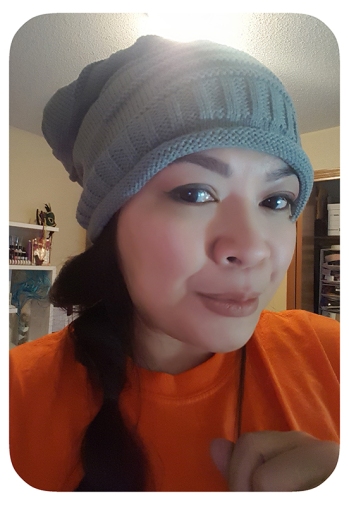 I do like slouchy hats, I’ve knit a few in the past, so it’s probably just because I have that darn orange shirt on. Yeah, I think so. In looking at it, I think it would go nicely with maybe a black shirt or a blouse and some jeans or slacks with a jacket. It is a little too oversized/slouchy in the back for me and kind of just flops over onto itself. If I pulled it all the way down so the crown was on the top of my head, it would cover my entire face and neck. However, that said, if I tucked all of my hair under, it would fit fine. The gray is a nice color and I like the rolled edge, the ribbing in the cuff and the ribbing pattern of the cap.

This one, however, took quite a long time to travel here – that darn international shipping. It took about 5 1/2 weeks (or was it 6?) to get here.

The quality is not bad though for a commercially made knit beanie.

*Disclaimer: The slouchy beanie was given to me complimentary in exchange for an honest and unbiased review. This evaluation and review is an accounting of my true opinions and experiences, and is written in the same manner as if I had bought it at full-price, been given as a gift, or received as a sample.

You can purchase the beanie on Amazon:

Prices and availability current as of the time of writing this post.